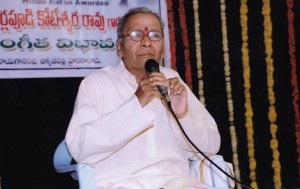 Dr. Mahabhashyam Chittaranjan  a living legend in Telugu light music, was born in 1938, 25th of August . His father Sri. Rangachary was a retired chief engineer of All India Radio. He was a great devotee of Sri Shirdi Sai Baba and inherited deep spiritual thinking from his fore fathers. His mother Smt. Perin Devi was a musician and could play veena, violin and harmonium.  Chittaranjan, eldest son of the family was raised listening to his mother”s songs and at a very tender age could sweetly repeat whatever his mother sang. This amazed his parents who identified the prodigy in the kid and decided to train him in Music. He was initially trained by his mother and then by Sri. Putcha Subba Rao garu, father of famous composer Sri P.V.Sai Baba. Later He learnt music from Padma Vibhushan Dr. Mangalampally Balamurali Krishna and accompanied him in several concerts for several years.  Chittaranjan started singing in Deccan Radio, { under Nizam government} from the age of 8 years. He could sing very complicated songs with ease and mesmerized the audience. Mandapati Venkata Raju garu,  a music composer at Radio encouraged the young boy and made him sing play back for female artistes also. Chittaranjan was a regular artist of Radio and sang wide variety of songs. He later joined All India Radio service as Music composer in 1971 and retired in 1997. His association with AIR as a singer and composer  is over 6 decades old. Prior to his job, He worked under famous music director Master Venu in Telugu film industry and was associate music director for VIDHI VILASAM.

He was awarded DOCTORATE OF PHILOSOPHY from International University of Complementary medicine, Sri Lanka and is also conferred with KALARATNA title by the government of combined state of Andhra Pradesh in 2008. He was the first person to have composed entire BHAGAVADGITA consisting of 701 shlokas and GITAMAHATMYAM consisting of 28 shlokas in 174 ragas of Carnatic and Hindustani styles in 1984. He is the only musician in India who has conceived, designed and prepared a TWO YEAR DIPLOMA COURSE FOR LIGHT MUSIC, THE FIRST OF ITS KIND IN INDIA. This was approved by POTTI SREERAMULU TELUGU UNIVERSITY of Hyderabad and the course was started in 2000 A.D. He has composed music for over 15000 songs and has sung more 8000 songs in his long career of 6 decades. He is an A grade vocalist of light music since 1972 and TOP GRADE Music composer of All India Radio since 1998. He has sung for Telugu Features Films like KULA DAIVAM (1960), SWARNA GOWRI (1961), SURYACHANDRULU (1977) and Worked as music director for MANA MAHATMUDU (1977) SRI YADAGIRI LAKSHMI NARASIMHA MAHATMYAM (1994) and many other Documentary films like RENDU PUVVULU etc.

During his tenure in ALL INDIA RADIO as a senior composer, he has presented programs like EE PATA NERCHUKUNDAM, KALASI PADUDAM which have won accolades from common people as well as eminent musicians.

He had written a series of Research oriented articles on Light Music continuously for 3 and a half years for a popular Telugu fortnightly magazine HAASAM, which was widely appreciated and acknowledged by Music Vidwans , film music directors and also by many music lovers across the country.

Known to be LALITHA SANGEETA SARVAGYA and a BHASHYAKAR of light music, he even today continues to train youngsters for several competitions and is relentlessly engaged in recording various CDs on light music.