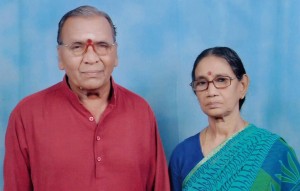 Born in the year 1941, in a family of scholars and musicians, familiarly known as Bukkapatnam family . Father late. B.T. Narasimhacharyulu was a great scholar in Sanskrit and astrology, mother Late Rukmini was a house wife. She has done UBHAYA BHASHA PRAVEENA IN Sanskrit and Telugu and won the prestigious ‘VEERABHADRAM MEMORIAL PRIZE’ for standing first in the university. She is equipped with music knowledge too and has done B.A in Music from Andhra University in 1968. She has done Ph.D in telugu from Osmania University in 1987apart from M.A and M.Phil.

She has been in the literary field since 50 years as an established writer. She worked as a script writer in AIR, Vijayawada from 1968 to 1972. Later she worked as a telugu lecturer in St. Joseph’s Junior college Hyderabad.

She has been contributing many short stories, poetry, literary essays to many leading telugu magazines like ANDHRA PRABHA, ANDHRA JYOTHI, YUVA, JAGRUTI etc. she has participated in the NATIONAL SYMPOSIUM OF POETS conducted by AIR, New Delhi many times.